by Guest Author on November 8, 2017 in hunger offering

Widespread panic, fear, and uncertainty erupted in the days after Aug. 25, when Hurricane Harvey made landfall and surpassed expectations of its potential destruction in Texas. Many experienced devastating loss as the state and country were forced to face the lurking question — what next?

Polk County Mission Center, also known as Center of Hope in Livingston, answered the question by serving. For those who had lost hope, the center provided resources to bring it back by establishing themselves as a 24-hour distribution center that began Aug. 31.

Thomas Crow, treasurer of Polk County Mission Center, said volunteers showed up alongside 18-wheelers and a U-Haul truck from East Texas Food Bank at midnight on Sep. 4. It also received donations from local areas and other states.

Their goal was to get cleaning supplies, clothing, and food from across the country out to areas heavily affected by the storm. They recorded more than 4,000 volunteer hours of work over 28 days.

Throughout the process, the ministry served about 2,400 people directly and continues to assist individuals affected even today. However, this is just a glimpse into the impact Center of Hope has had on their community.

“Our purpose is to help the needy,” Crow said, explaining that before the Mission Center, there were not many opportunities to serve the county in this way.

Crow and other volunteers have worked for the past six years to expand by reaching out to local churches to join the work and support the mission of the ministry. 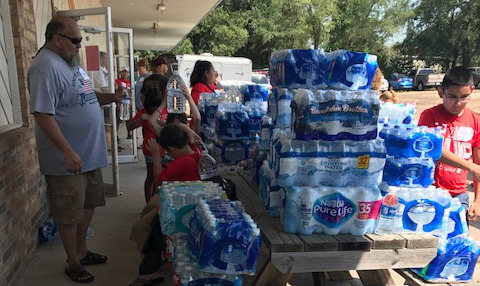 Polk County Mission Center started in 1985 as a food pantry by six different churches around the county. It has now grown to also hold training classes on topics like nutrition and financial management to help families sustain themselves.

Along with 14 local churches that are invested, the Texas Baptist Hunger Offering helps support the ministry financially and prayerfully. Center of Hope has grown from seeing 20-25 families to 40 families each time it opens, and it has had as many as 70 families in one day.

The center is open twice a week in the afternoon and once a month in the evening. This system allows families to go in once a month and pick whatever food they need based on a point system.

When the ministry needed a bigger space, it purchased a vacant grocery store building. This building, which the Center now shares with Habitat for Humanity and Campaign 300, provides space for the food center and offices.

Though the ministry has grown in the past few years, it keeps moving forward. As an example, Crow noted a federal grant it received administered through Texas Department of Transportation, which provided the Center an eight passenger, wheelchair accessible bus.

“We’re hoping to make it a wider ministry,” Crow said. Ministry leaders hope people soon will be able to be picked up and dropped off at the center to receive the assistance they need.

With the bus and outreach to victims of Hurricane Harvey, Polk County Mission Center is faithfully living out their purpose: helping the needy.

The Hunger Offering partners with ministries like the Center of Hope to fight hunger and provide resources for families to break the cycles of poverty. To partner in this work, give to the Hunger Offering by visiting https://texasbaptists.givingfuel.com/hunger-offering.

Abby Hopkins is an intern with the Texas Baptist Hunger Offering. She is a freshman at the University of Texas in Austin.